Each year, the University and Radio LaB teams up with Luton Sixth Form College to offer pupils the chance to air their audio content to a real radio audience. In 2019, the Takeover Show and Radio LaB won an award for ‘Best Outreach Project’ in the I Love Student Radio Awards. 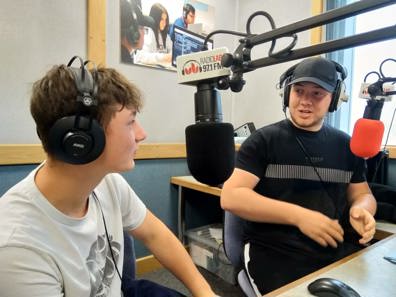 “To give them a week of live broadcasting at the University is really the icing on the cake. The students have been hard at work preparing their shows and we can’t wait to get on the air.”

College student Luke White added: “I’m a little nervous but it’s a new experience and it’s exciting. I’m really looking forward to it, I’ve been planning to make sure it’s a real success.”

During the week, the students produce and present their own shows, including music based segments, features and discussions, enabling them to gain experience in the world of live broadcasting.

Terry Lee, Senior Tutor in Radio & Audio with the University’s School of Arts & Creative Industries, who also oversees Radio LaB, said: “My favourite time of year for Radio LaB is Luton Sixth Form College’s takeover programmes. It is amazing to hear the views of the college pupils on air – who are always a real credit to the college and the town. They make the most of using Radio LaB’s industry-standard radio studios to have their shows broadcast across Luton on 97.1FM.”